The gift that keeps on giving. Treyarch has provided yet another settings update alongside the start of the first 2X tier boost event. This update comes shortly after the release of a major update to Call of Duty: Black Ops 4 that saw tons of weapon balancing and the removal of the 9-Bang from Blackout. This update is a bit more well rounded, covering all three game modes. Zombies, Blackout, and Multiplayer have all received changes.

Blackout, the popular franchises battle royale mode has received some slight weapon adjustments in the form of a tweak to the Paladin sniper rifle and concussion grenade. The Paladins damage was slightly increased as a way to “reduce headshots required to take out an enemy equipped with Level 3 Armor and 200 Health from a Trauma Kit.”

Zombies received a whole list of resolved bug issues, allowing for better performance, stability, and play-ability for all. Several known crashes were fixed along with an issue where “players would not be kicked for inactivity in round-based game modes if the round ended before the kick timer.”

The multiplayer adjustment was mostly focused on Hardcore mode where the SMG’s received a boost allowing them to get a one-hit kill in close quarters combat. All weapons will now kill in two hits maximum in the mode thanks to a reduction in armor protection. In addition, the number of specialists per team has been reduced to 2 in Hardcore Team Deathmatch and Hardcore Kill Confirmed.

You can find the full patch notes below or here:

We’re kicking off the weekend with our first 2X Tier Boost Event in Multiplayer and Blackout, plus 2X Nebulium Plasmain Zombies on all platforms, now live through 10AM PT Monday, Nov. 12! Everyone earns Black Market Tier progression twice as fast during the event – and new ways for all players to boost Tier progression through playing the game are on the way, including daily bonuses. 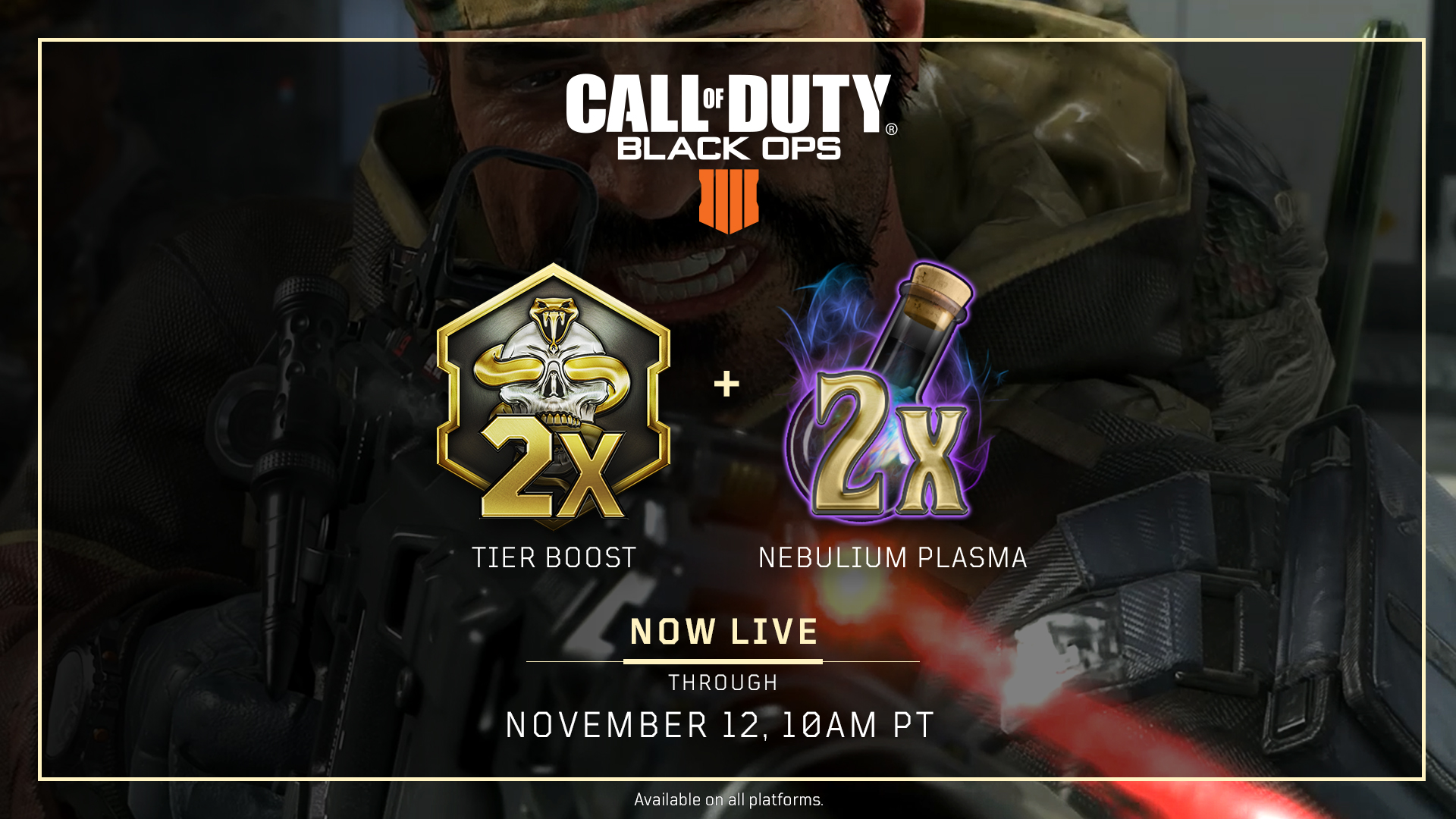 Zombies players: as we mentioned in our last update… we’re going in. Expect the gritty details on stability fixes in our patch notes going forward, including today’s update. Even if a bug we’ve fixed is obscure or not easily defined, we’ll get as granular as we can in the details. These community updates are for all Black Ops 4 players, and we’re playing the game right along with you. Let’s do this.

Speaking of which, we’ve made a new round of stability improvements in Zombies with today’s patch, including some crash fixes across all maps, as well as resolving specific bugs and crashes in IX, Voyage of Despair, and Blood of the Dead. See the patch notes below for the full list of fixes.

In Multiplayer, we’ve made some balancing changes to Hardcore modes to make SMGs more competitive in HC playlists, and we’re kicking inactive players more effectively to make sure your teammates are actually team players.

And in Blackout, we’ve tweaked the performance of the Paladin sniper rifle and the Concussion Grenade, and we’ll continue to monitor the effectiveness of all weapons and Equipment for future balance passes. Jump in and let us know how they feel.

Now, a look into next week: Nuketown arrives on PS4 on Tuesday, November 13! Stay tuned for a closer look at Black Ops 4’s revival of one of our most popular maps of all time. We can’t wait to jump in and play with you all very soon.

Finally, we’ve got some major game updates coming early next week. These will include new balancing tweaks, stability fixes, Featured playlists, gameplay improvements… plus new surprises as we celebrate the launch of Nuketown this month in Black Ops 4.

We’ve made the following updates to the game (Global):

Have fun out there this weekend, and get ready for more updates early next week.